On June 17, the conference participants will have the opportunity to visit Cracow.

The cost of the trip is not included in the conference fee, as the event is optional. To participate in the event please tick the appropriate box in the registration form.

Cracow is the second largest and one of the oldest cities in Poland, its history dates back to the 7th century. It is situated on the Vistula River in the Lesser Poland region.

Cracow has traditionally been one of the leading centres of the Polish academic, cultural, and artistic life and is one of Poland’s most important economic hubs. It is home to the Jagellonian University, one of the oldest universities in the world and traditionally Poland’s most reputable institution of higher education.

Cracow is cited as one of Europe’s most beautiful cities and the most often visited place in Poland.

In 2000 Cracow was named the European Capital of Culture and it has been also approved as a UNESCO’s City of Literature. 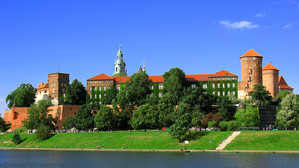 Must See in Cracow

Cracow historic centre is one of the 13 places in Poland that are included in the UNESCO World Heritage Sites.